The Executive Secretary of the Intergovernmental Oceanographic Commission of UNESCO (IOC), an arm of the United Nations, officially endorsed Marine Life 2030 to officially be part of the UN Decade of Ocean Science for Sustainable Development (2021-2030). It is one of 66 actions endorsed by the UN on World Ocean’s Day.

We invite proposals that highlight synergies with Marine Life 2030.

The goal of the UN Decade of Ocean Science is to do “the science we need for the ocean we want.” The primary goal of the 10-year Marine Life 2030 program is to establish a globally coordinated system to deliver actionable knowledge of ocean life to those who need it – promoting human well-being, sustainable development, and ocean conservation.

The global economy is linked to the diversity of life in the sea and to healthy marine ecosystems. Yet many questions remain about how the abundance of marine organisms is changing over time in response to climate change, pollution, acidification, and more. Countless species remain to be discovered and knowledge of the ocean’s 200,000+ known species is fragmentary at best – all of this, at a time when human activities are causing the extinction of some 1 million of the estimated 8 million plant and animals species on the planet.

“There have been several methods used by scientists to track species over time, for example – and we need to much better coordinate so that the science community can make truly actionable recommendations to policy-makers, management officials and other stakeholders,” said Muller-Karger. Earth Observation (EO) technologies, from satellite remote sensing to in situ optical and acoustic sensors, ‘omics’ tools and new machine learning approaches, have opened new opportunities to map and monitor marine life diversity, distribution, and abundance from local to global ocean scales. Consistent data standards and sharing protocols for essential ocean and biodiversity variables are now needed and will benefit the integrated research and usage of data by end users.

Marine Life 2030 will serve as a connector and facilitator between several existing groups, such as the US Integrated Ocean Observing System (IOOS), the GEO BON Marine Biodiversity Observation Network (MBON), the Global Ocean Observing System (GOOS), the Ocean Biodiversity Information System (OBIS), the World Conservation and Monitoring Centre (UNEP-WCMC), the Ocean Knowledge Action Network of Future Earth, and many more. In addition to a host of national and international government partners, the program, led by MBON, includes more than 30 NGO partners and nearly 40 academic partners across the globe.

Marine Life 2030 (ML2030) invites people/groups to develop “Ocean Decade Project” proposals which focus on co-design, that build relationships with existing partners in ML2030, and that bring in-kind resources or funds to stand up activities relevant to the Challenges of the Decade.

We request that people/groups interested take a look at these suggestions from Marine Life 2030.

Frank E. Muller-Karger is a biological oceanographer (Professor) at the College of Marine Science, University of South Florida. He is of Hispanic descent via Puerto Rico, and while born in the U.S. he grew up in Venezuela. Muller-Karger conducts research on how marine ecosystems change in time. He uses time series of observations collected by traditional oceanographic methods and by satellite sensors to study changes in water quality, primary production, and biodiversity in coastal and marine environments. This research helps in understanding how large-scale phenomena, like climate change or other disturbances, affect ecosystems including people. The focus of his present work is to assess the importance of continental margins, including areas of upwelling, river discharge, and coral reefs in the global carbon budget. Muller-Karger combines the observations from different satellites to measure ocean color, sea surface temperature, winds, salinity and sea surface elevation and how these change. He uses field-based time series to measure the vertical structure of plankton and how particles settle in the ocean. Much of this work focuses on improving methods to measure the diversity of phytoplankton using remote sensing.

Muller-Karger has worked hand-in-hand with K-12 teachers and students and the public to showcase these new technologies and to highlight the importance of the ocean in our daily lives. He has a keen interest in linking science and education, and in addressing the problem of under-representation of minorities in scientific research programs. Muller-Karger was appointed by President George W. Bush to serve on the U.S. Commission on Ocean Policy in 2001. In 2005, he was appointed to the Ocean Studies Board of the National Research Council/National Academies. He previously received the NASA Jet Propulsion Laboratory Award for Outstanding Contributions and the NASA Administrator Award for Exceptional Contribution and Service for supporting development of satellite technologies for ocean observation. From August 2007-August 2009 he served as Dean of the School for Marine Science and Technology (SMAST) at the University of Massachusetts Dartmouth. He has B.S., M.S. and Ph.D. degrees in marine science and a Masters degree in management, and has authored or co-authored over 120 scientific publications. He speaks fluent Spanish and German. 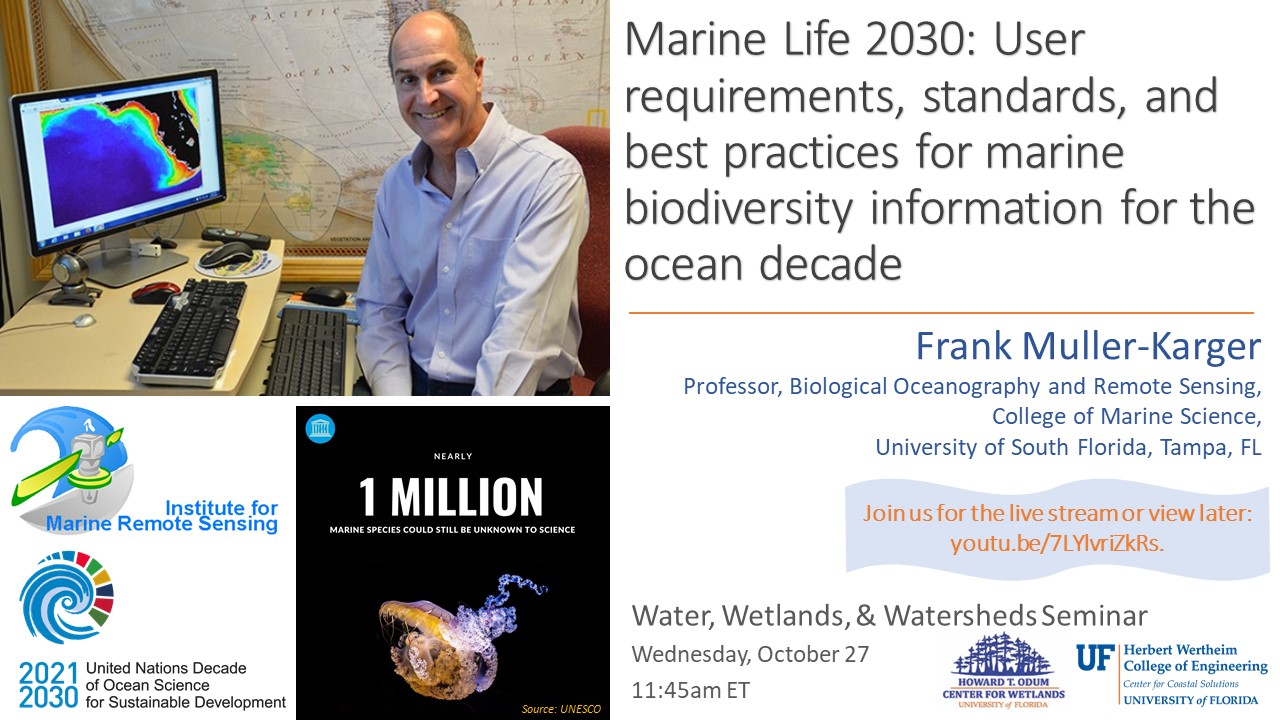