Who owns the shoreline: The law and policy of ambulatory boundaries

Submerged tidally influenced lands are typically owned by the state and held in trust for the people. Among the rights protected under the public trust doctrine are fishing, swimming and navigation, and by implication, water quality and habitat. Private property typically extends to the shoreline creating what is referred to as an “ambulatory boundary” between public and private property, one that migrates with the daily and seasonal tides and is subject to the forces of erosion, accretion and avulsion. As sea levels rise, shorelines migrate inland until they reach obstructions such as sea walls, roads and buildings. Coastal squeeze refers to this loss of shoreline for human use and habitat. This presentation will describe the law of ambulatory boundaries and the management implications of coastal squeeze for lateral shoreline access and for riparian ecosystems.

Professor Ankersen directs the University of Florida Conservation Clinic, the experiential learning arm of the College’s Environmental and Land Use Law Program. Ankersen also directs the College’s Costa Rica Program. He practices domestic, international and comparative environmental law with an emphasis on Florida, Latin America and the Caribbean. Internationally he has worked and/or taught in 30 countries, though his focus remains in Latin America and the Caribbean. In the late 1990’s he helped to found the Mesoamerican Environmental Law Network, a consortium of non-governmental advocacy organizations. Internationally, his work has led to both domestic law reforms and international agreements in Africa and Central America as well as in the United Nations treaty system (World Heritage Convention Operational Guidelines). Ankersen has used his clinical experience to aid in the formation of 4 new environmental law clinics at law schools in Costa Rica and the Brazilian Amazon. In Florida, Ankersen works with state and local governments as well and non-profits to pursue innovative solutions to environmental and land use issues through law and policy. He serves as Florida Sea Grant’s statewide legal specialist. Ankersen is fluent in Spanish.

Professor Ankersen’s international scholarship has centered on comparative civil and common law, in particular comparative property law. In 2005 he received a MacArthur Foundation research and writing grant to study land tenure and administration in Latin America, which led to pioneering English language research into the “social function doctrine,” a gloss on property ownership not found in the common law. He has also published on the growing recognition of an international law of property, distinct from domestic law, and its relation to human rights and sustainable development law. His articles have been re-published in Spanish and Portuguese. Domestically, Ankersen researches and publishes in the area of environmental restoration, climate adaptation, and marine and coastal law and policy. He serves on the board of the National Sea Grant Law and Policy Journal. 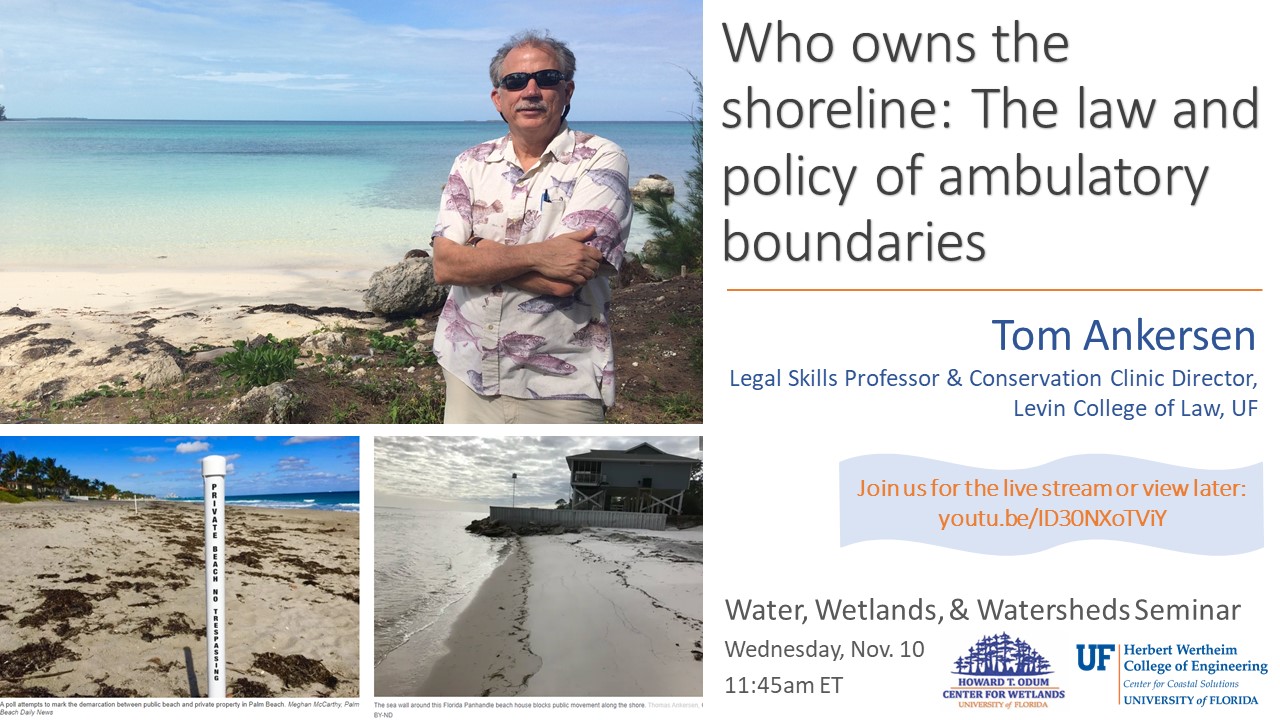